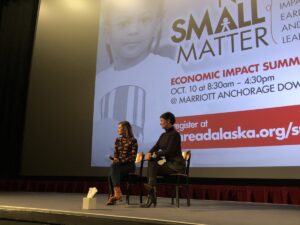 A viewing of the national film No Small Matter , followed by Q&A with the filmmakers was held at the Bear’s Tooth Theatrepub to kick-off thread’s 3rd Economic Impact Summit on Early Care & Learning. There were 300 attendees at the event. The film was later shown in the Mat-Su Valley, Valdez, and to the Alaska State Legislature.